Love has always been a point of interest in humankind. Songs have been sung, stories have been written, movies have been shot, researches have been conducted. Anthropological research shows that people throughout the world, from developed First World countries to indigenous tribes define romantic love in the same way – as an intensive attraction which includes idealization of another person and sexual contact, as well as the expectation that the relationship will last for some time.

As in the rest of the world, love has also been one of the central topics in the Game of Thrones series. In the name of love, people commit murders, arsons, and suicides; they lie, deceive, and steal; they disguise themselves, eavesdrop or bribe. The power of love is one of the main plot movers.

But, are all loves throughout the series the same? Do they have the same intensity, the same duration? Are they based on the same foundations?

The short answer is, of course, no. There are as many types of love as there are couples. Still, there are some ways in which we can classify love.

Basically, his theory says that love in partner relationships can be explained through three dimensions – intimacy, passion, and commitment.

Passion refers to the drives that lead to romance, physical attraction, sexual consummation and related phenomena in a relationship.

Commitment refers to the decision that they will maintain the relationship, e.g. make an effort to make a relationship last.

Combining those dimensions leads to eight different types of love which are presented on a picture below.

In the following paragraphs, we’ll explore some of the most well-known couples in Westeros and their types of love.

Davos and Shireen feel very at ease with each other. She is one of the rare people to whom Davos can show his vulnerability and shame because he can’t read and is fine with her giving him reading lessons, knowing that she will be patient and discreet about that. Shireen, on the other hand, confides in Davos as he is giving her the parental love she never received from her parents.

Still, as much as they enjoy each other’s company, there is no commitment in it – she is a princess, and he is her father’s servant, who goes wherever Stannis sends him. He’s not in Shireen’s direct service, as much as he feels loyal for her. And I believe there is no point to describe why there’s no passion in this relationship, even though we talk about Game of Thrones 🙂

Infatuation is the type of love that includes passion only. It is characterized by physical attraction and sexual arousal and it often occurs in what we call love on the first sight. Infatuation lacks the feeling of closeness and decision that we will maintain in a relationship. If those two dimensions do not develop over time, infatuation tends to be short-lived and superficial.

A good example of this is Sansa’s infatuation with Loras Tyrell. She fell in love with him without getting to know him. She saw him as a wonderful, fairy-tale knight. He was brave, good looking, with a splendid armor and he was skilled in battle. When he looked at her after the battle and gave her the rose, infatuation was complete.

As she was engaged to Joffrey at that time, her infatuation to Loras lacked commitment. Also, as he lived in Highgarden at the time, they didn’t spend any time together so the intimacy couldn’t be developed. As attracted as Sansa was to Loras, without other dimensions, that attraction was short-lived.

As there is a high percentage of arranged marriages among the nobility in Westeros, empty love is actually very common. During the time, many of those marriages develop into either companionate or consummate love.

Marriage between Margaery Tyrell and Renly Baratheon is a great example of empty love. They were both very committed to the marriage, each of them from their own reasons. Renly needed Tyrell’s gold, food, and armies, and Margaery wanted to be the Queen. They were a powerful, great looking couple which inspired people.

Still, their love was empty; because of Renly’s homosexuality, passion obviously couldn’t be developed. They haven’t spent much time together to develop intimacy; as Renly had an intimate relationship with Loras, there was actually no need to make Margaery his confidant.

Even if their marriage wasn’t interrupted by Stannis’ shadow baby, I believe their love would remain empty in the future.

Romantic love is the first of the two-component loves. It is characterized by both emotional intimacy and sexual passion. This type of love is usually found in the first stages of relationships – couples are sexually drawn to each other and also enjoy spending time in each other’s company. As this type of love lacks the commitment to relationship, it is much more common in young age.

Jon Snow and Ygritte have experienced romantic love. They loved spending time together – going hunting, exploring caves, talking about life as a lord’s son and as a wildling, fantasizing about the future and so on. They have also been physically drawn to each other – that much that Jon even broke his Night Watch wows and his fear of fathering a bastard child.

Fatuous love is another side of our triangular theory. It is characterized by the presence of long-term commitment to a relationship and physical passion. This type of love is often called fantasy love – the couple really wants to be in love, but they haven’t spent enough time together to create a real, intimate, emotional bond. It’s often seen in whirlwind romances when a couple gets married in a few days/weeks/months since they first met. We could say that they have made a long term decision based on a mutual attraction, without waiting for a relationship to stabilize and become deeper.

Lyanna Stark and Rhaegar Targaryen were the first couple I thought about when I was planning this post. Fatuous love should have this picture next to it in the dictionary. They’ve met at the Harrenhal tourney, where Lyanna got carried away with Rhaegar’s fantasy about the third head of a dragon. They have eloped together, annuling Rhaegar’s marriage to Elia Martell, breaking off Lyanna’s betrothal to Robert Baratheon and effectively starting a rebellion. They didn’t have time to get to know each other better – they’ve married quickly and Lyanna got pregnant immediately.

I wonder how their love story would progress if Rhaegar had survived the rebellion; would they make it work?

Companionate love comes up as type which combines emotional intimacy and commitment to each other. This type of love is usually found in long-term marriages, where the passion had faded, but the couple is still deeply committed to their relationship and enjoy each other’s company. Even without passion, this kind of relationship can be deeply comfortable and satisfying.

Ned and Catelyn Stark definitely fit this definition. Their relationship has started out as empty love; Catelyn was meant to marry Ned’s brother Brandon, with whom she had spent significant time in Riverrun and got to know him, but, after his death, she married the new Lord of Winterfell, who she first met on their wedding day. As they were both highborn, they were raised without expecting that they will marry for love, so they both accepted this duty. As the years passed, they’ve learned to enjoy each other’s company and have grown to love each other deeply.

And in the end, we have the most complete type of love – consummate love. It is an ideal relationship, the one that people strive forward. It combines all three points of a triangle into one relationship, full of emotional intimacy, sexual attraction and willingness to maintain the relationship against all odds. Consummate love is very rare to find; it usually develops after long periods of time.

This type of love is considered the hardest to maintain; Sternberg himself said that even the greatest loves can die without expressions of love. If any of its components fades during time, the love is no longer consummate. 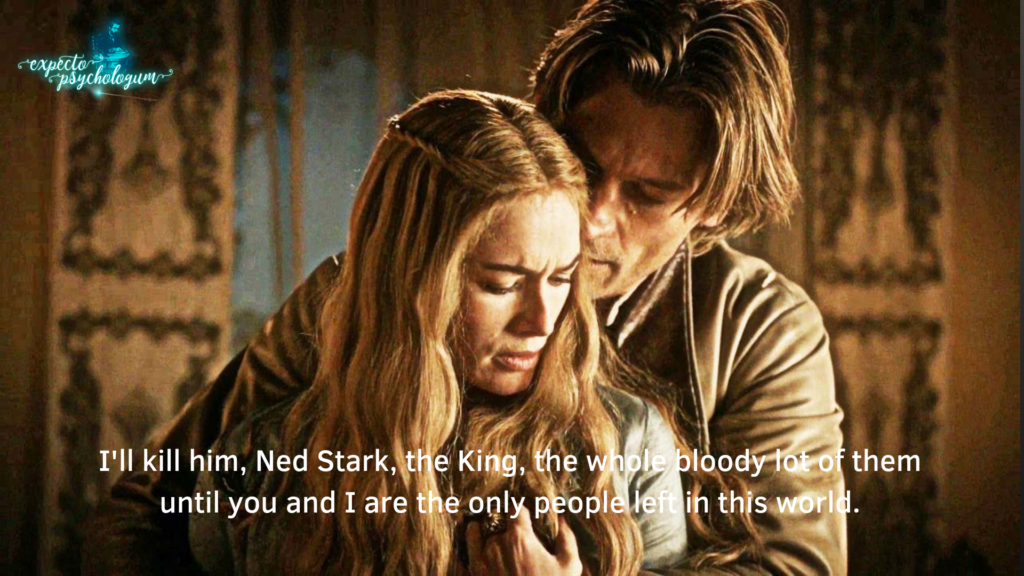 Anyone who is a regular watcher of Game of Thrones won’t be surprised when the shocking, incestuous relationship is actually considered as the idealistic one. Cersei and Jaime Lannister really have it all. They are very emotionally close – Cersei often thinks of them as the same person. They confide into each other; feel close to each other and at ease when they are together. Also, they’re very attracted to each other – so much that they didn’t care about the incest taboo or the possible repercussions of their relationship. Jaime has been so attracted to Cersei that he never even slept with anyone else. And finally, they are also extremely committed to their relationship; even though Cersei had to go to the court, Jaime had asked for a position in a Kingsguard so he could always be close to her, leaving his position of a future Lord of Casterly Rock and the possibility of having a family.

To sum up, love is a curious thing, even in a fantasy show. By knowing the dimensions that love consists of, we can predict the outcome of a relationship more easily.

And who is your favorite Game of Thrones couple and why? Write me in the comments!

Which fandom would you like to be analyzed on Expecto Psychologum? (up to 3 answers)